The award wining piece ‘Skeyti’  is now exclusively available on the Danish 2xCD compilation ‘Lyd Kunst Arkivet’  (the Sound Art Archive), which was released by an organization called Monoblaster as part of the LAK Nordic Sound Art Festival which I had the privilege to open previously this year in Copenhagen. Lyd Kunst Arkivet does not appear to be on sale anywhere since the release at the festival in the limited edition of 50 copies. 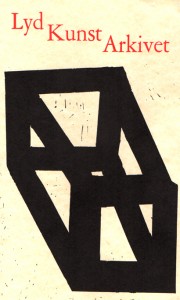